Summary of the Emission Reduction Plan (ERP) for Terbuthylazine

Terbuthylazine monitoring data (provided by the Flemish and Walloon governments) for surface water during the period 2017-2019 have been tested against acute and chronic water quality standards (MAC-EQS and AA-EQS). Based on the data, the main emission routes and vulnerable regions have been identified, and a plan has been made for reducing emissions to surface water*.

The monitoring locations are distributed evenly over Flanders and Wallonia and are spread across most river basins, including in regions with the highest density of maize. There were more than 7,400 water samples in total analysed per year, originating from 247 to 284 locations. Depending on the year, no terbuthylazine was detected in 62 to 70% of the samples. Annually, 0.2 to 0.5% of the measurements were higher than the MAC-EQS. The number of locations where an environmental quality standard (EQS) was exceeded, varied from 2.1 to 4% (in absolute numbers this equals 8 to 11 locations per year, and 24 different locations over the entire three-year period). 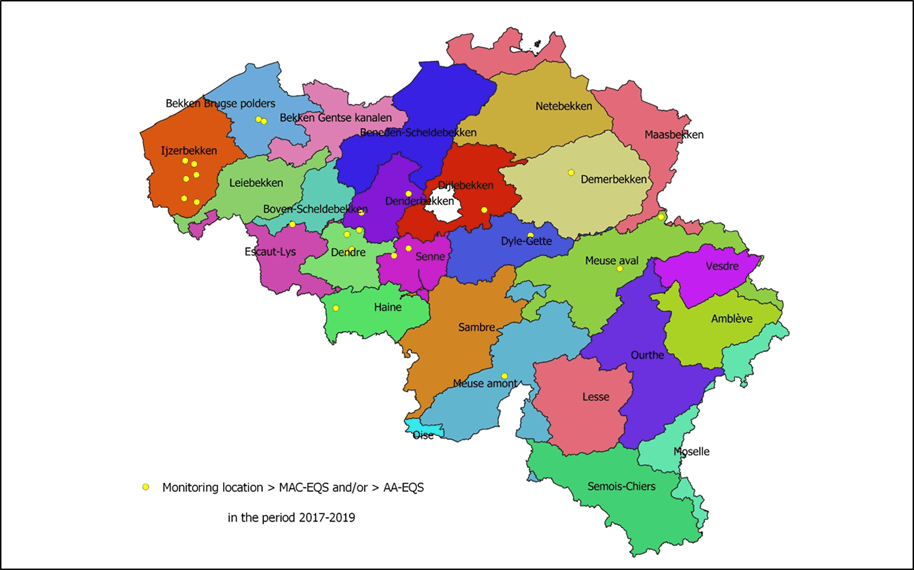 Based on the 2017-2019 monitoring data, we have come to the following conclusions:

For this reason, the following specific measures are proposed for inclusion in the emission reduction plan:

For mixtures with S-metolachlor, the following also applies:

For mixtures with dimethenamid-p, the following also applies:

As well as these additional recommendations, extra attention must be paid to the statutory measures as specified in the product authorisation certificates:

Authorisation holders of terbuthylazine are also asked to commit to the following general measures: